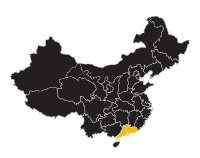 This tea is a direct descendant of the original Guangdong "single trunk" subvarietal noted for its distinctive sweet aroma. Allowing it to cool after a fast gongfu steep, first, the honeydew flavour comes gushing to the fore. The palate is then filled with a refreshing mint-like cool followed by a coating of cinnamon afters that linger. A dessert degustation in one brew.

Highly recommended to be served over short, fast, multiple steeps.

Pro tip: After extraction, let the tea rest for a minute before tasting or smelling. It makes a big difference in the layers of flavours and aromas experienced.