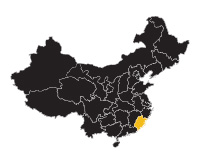 This is a unique tea in so many ways. Whilst the area is famous for its spring picked white teas including the silver needles and white peony, the Golden Peony remains one of its most heralded. Unlike other Zhenghe white teas, the Golden Peony is a hybrid varietal originally crafted in Wuyi 200km to the north west. In Wuyi, the invention was an attempt at adding a new "rock oolong" to capitalise on the trending category of tea.

But Caiqing had other ideas. They wanted to see how the plant would turn out if they applied their white tea processing techniques instead.

Before they got down to processing, they also realised something peculiar about this plant in their adopted terroir. Suprisingly, where the native Zhenghe white peony varietals lay dormant in autumn, the Wuyi migrant began to thrive!

These standout plants yielded an unparalleled concentrated sweetness. Coupled with their relative scarcity, this white tea version of Golden Peony is highly prized and supply is frequently well short of demand each year.