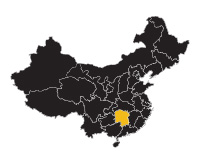 The emperor’s quest for immortality led them to fu cha, a tea believed to deliver immeasurable health benefits including curing and preventing diseases. But what is it about fu cha that continues its legacy as China's miracle tea since its discovery in 1534?

The indigenous tribes of north western China believed that fu cha aids digestion and was the perfect supplement to their high protein and fats diet due to scarcity of fruits and vegetables. When the emperor learnt what provided the invading mongol tribes their strength and vitality, he was eager to retain it for himself.

A key feature of producing fu cha is its unique double-fermentation process. The tea leaves are first piled and left for one year in a controlled space. The tea is then compressed into brick-form with the right amount of density and left to ferment again. This allows it to form its distinctive golden flower’’, the beneficial fungus Eurotium Cristatum that promotes digestive enzyme activity particularly those that help break down protein and starch and regulate blood sugars. Because of this, fu cha is heralded as beneficial to diabetics and helping weight loss.

For ease of use, we break it down for you by hand into small chunks. A soothing and light black tea with hints of kumquat on the backdrop.