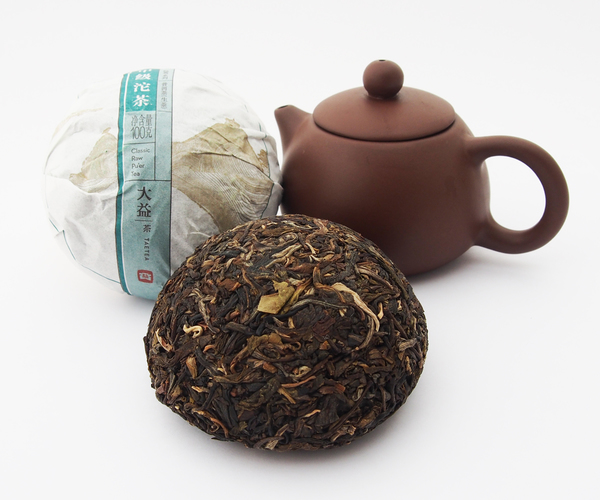 Ay, so you’re ready for a taste?

Let’s start with the original yet ironically, the less familiar. Let’s go with a compressed sheng or “raw” pu-erh.

You may recall from the last post that the now popularised shou (“cooked”) version to which most people these days associate pu-erh synonymously was actually developed as an ode to the original aged sheng pu-erh. So let’s see what the original is like before we get into the more common dark stuff.

We suggest that you start with an aged sheng, maybe something in the 5 years + mark, something like the 2010 Gu Yi sheng disc or the 2011 Mahei "Large Trunk" disc. In terms of your first taste, it doesn’t matter too much whether you get a disc, brick or bowl shaped compressed sheng. But for the purists, you may opt for the classic 357g disc, the original compressed format. Why this odd weight? This is because discs used to be sold in bundles or “tongs” of 7, and 7x357g will give you 2.5kg which is equivalent to the Chinese 5 “jin” weight denomination. If you want to start smaller, you can also opt for a small bowl or “tear drop”shape (our sheng tear drop is not yet aged but it’s based on a 1993 recipe so it can still give an aged feel).

But why choose a compressed version as opposed to a loose leaf? Again, this goes back to developing a historical understanding as well as appreciating the cellaring process. Pu-erh was originally compressed as a means for it to be conveniently transported, then it was discovered that the compression allowed the tea to mature slowly and develop character. These days, it’s uncommon to purchase loose leaf sheng pu-erh, unless you are buying it as “mao cha” or “rough tea” – this is usually done by distributors who intend to taste-test the raw material before requesting the producers to make the compressed forms.

Later on we’ll reverse engineer our education and taste some mao cha. But for now, let’s get on with the business at hand.

Once you’ve chosen your tea, you also need some basic tools. Without getting too fussy, at minimum, you’ll need:

Insert your pu-erh knife into the side profile of your compressed sheng pu-erh. Pry the tea apart with your knife by wiggling the knife from side to side. Aim to break off a piece around the size of a 50 cent coin, around about 10g worth.

Warm your pot, put your tea morsel in and fill it up with approx. 85C water - for sheng pu-erhs, water temp that's too close to boiling have a tendency to overheat the leaves and make your brew too astringent. Pour out the first rinse through your strainer into your fairness cup and from your fairness cup into the drinking cups as a means of “curing” the cups. Discard the first rinse.

Now brew your first infusion for about 20 seconds. A good pu-erh usually can carry around 8+ infusions with similar parameters (temp., leaf to water ratio) as ascribed above. However, there will be variances in the amount of time you brew each subsequent infusion. Infusion times will vary greatly depending on how tight your tea morsel is and how long it takes for the leaves to separate. Once you see the leaves starting to separate more, you may like to cut your infusion time as there's more leaf surface area exposed to water and thus, a faster extraction. As you get to about the fourth infusion, your brewing time might be instantaineous, pouring from your teapot as soon as it's filled. Then, as the tea begins to lose strength, from the seventh infusion or so, you can extend the brew time again. Brewing skills will come with experience and attentiveness, all part of the fun when brewing compressed teas.

From a reasonably aged sheng, what you’re looking for is a lasting but not overly sharp briskness (not dissimilar to a good Darjeeling). It’s an uplifting sense of alertness. The taste itself is part muscatel, part marine and part mineral. Often, there’s also a cooling mint like effect.

On a mid-strength steep, the liquor should be golden. As you get towards the latter infusions, begin to intentionally brew it for longer. This will help you understand why the shou pu-erh was later invented.

Younger shengs and sometime sheng pu-erhs of an inferior quality will often have a strong tartness to them. It will give you that tannic, puckering mouth-feel. You don’t want that. What we’re looking for is brightness that lingers but not that which overwhelms.

If you’ve made it this far and still keen to explore, what we’ve got coming up is a little more intricate. Before we get into the shous, let’s discuss some of the various types of pu-erh producers and manufacturers. So far we’ve started you off on some well-established factory pu-erhs but there’s also a whole world of smaller independent Yunnanese pu-erh artisans that’s developing some serious cache amongst the connoisseurs.