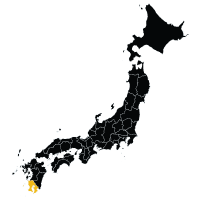 Kirishima-shi, Kagoshima Ken, Japan
Meet the Hayashis
A derivation of its complex history, the Hayashi’s fully-oxidised tea is filled with vast wonderment.
Firstly, as over 95% of tea production in Japan consists of green teas, Japanese black (or “red”) tea is the much lesser known.  Recent domestic fervor over Darjeeling tea has led to a resurgence in local black tea production, even mirroring the signature muscatel notes of its muse.
But the ode doesn’t end there. Hayashi’s black tea is from a hybrid cultivar called Benifuuki. This is a cross-breeding between the MukuraCd86 plant, local to Darjeeling (but of the very Chinese Camellia Sinensis genus!) and the Benihomare varietal which is of the Camellia Assamica, native to India.
What results is light-style black tea with obvious Darjeeling notes as well as a hint of melon, akin to a Chaozhou oolong.
Further note of the Benifuuki hybrid, this plant is known to have the highest EGCG levels amongst teas, an antioxidant proven to help resistance against allergies and inflammation.
Dry leaves: mid-length auburn leaves with gold tips
Taste: Darjeeling, rockmelon
Process: fully-oxidised
Brewing:
×